Homelessness Has a Name: Learn How Alex’s Life Spiraled After Job Layoff 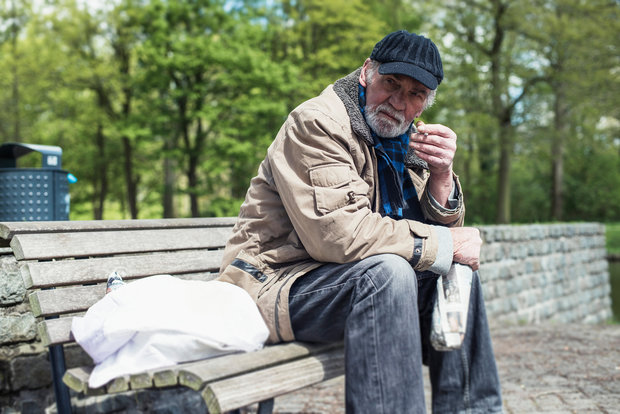 When you think of the “homeless,” what face comes to mind? A young addict in an alleyway? A middle-aged alcoholic asking for money at your exit? What about a 60-year-old family man that dedicated decades of his life to a local company and spent his weekends volunteering with the homeless? That last face has a name. It’s Alex*.

Alex is part of the homeless population aged 50+ that experts call “older homeless.” According to the Department of Housing and Urban Development, this group makes up approximately 30% of the measurable homeless population1, and their chance for recovering quality of life — let alone survival — is minimal.

In 2017, Alex came to The City Mission’s Crossroads Men’s Crisis Center, a local program that helps Clevelanders experiencing various crises recover and find a path to stability through holistic, long-term care. Right now, Crossroads, a 110 person program, houses 68 men over the age of 50. Twenty-five of those men are age 60+.

That means over 50% of The City Mission’s male guests face a much more challenging path forward than their younger clients. What’s behind this percentage, and what can be done to help a population with such varied, intricate problems?

Sadly, Alex’s cause of crisis that led to homelessness is the same as many other blue-collar workers’. He lost his job. The company he’d spent 20 years with suddenly let him go in favor of hiring younger workers. He looked around for more work, but couldn’t find an employer willing to hire someone so close to retirement age. Alex was stuck.

“When trying to help homeless men over 60, they often do not qualify for much financial assistance, but they are also not highly employable. If they do not have a valuable work skill or if they have a large gap in their employment history, it can be a challenge to find them a sustainable source of income,” says Mark Ballenger, a caseworker at The City Mission.

Job loss, recessions, rising housing costs, foreclosures and more can all throw a relatively stable, hard-working person into an emergency.  Studies show that it takes a person age 50+ an average of five months longer to find a job than younger workers. And according to the latest ALICE report, 28% of our neighbors in Cuyahoga County are at major risk for disaster after missing just one paycheck2. Residents that qualify as ALICE have income above the Federal Poverty Level, but not high enough to afford a basic household budget that includes housing, childcare, food, transportation, and health care. One unexpected expense or loss can send this part of the population, especially seniors, spiraling toward homelessness.

Alex’s difficulty in obtaining a new job was exacerbated by another factor — his health. While he was able to complete his tasks at work, he was becoming slower due to nagging hip pain. Because his only work experience was in physical labor, he hadn’t gained the computer skills necessary to obtain even a low-skill job in today’s digital world. In the eyes of many businesses, Alex was unemployable.

Medical issues can destroy finances, leave work history gaps and even render individuals physically unable to work. A person like Alex might be forced to turn to S.S.I. — Supplemental Security Income — a social service that helps low-income elderly and the disabled with a check of about $750 a month. But S.S.I. is for people 65 and over, and Social Security benefits do not begin until age 62. Even if a person does qualify for S.S.I, they are barely able to afford housing, let alone other basic expenses. Without work or a safety net, older homeless like Alex are left with a difficult gap to fill.

The most difficult part of Alex’s crisis came when his wife left him. She took custody of his teenage son, and his young-adult daughter moved out on her own. Alex maintained his relationship with his children, but they were unable to support him, and he was unable to provide them with the care he knew they deserved.

Many women over the age of 50 come to The City Mission’s Laura’s Home Women’s Crisis Center because of a late-in-life divorce that left them with little means to care for themselves. Other seniors face deep depression or addiction after the loss of a spouse or loved one. Some simply refuse to let family members know how much they are struggling, and would rather hide their crisis than become a burden. Whatever the case, when an elderly person’s support system disappears they can quickly find themselves on the street.

Another reason a person might become a part of the “older homeless” category is simply by aging into it. Ballenger saw this illustrated specifically in one of The City Mission’s recent guests. “Ray was born in the back of a pickup truck and never received a birth certificate or form of identification, Ballenger shares. “He struggled to find adequate employment or access the social services he was eligible for. We helped him gain an I.D., and today he has a job, a home and a community of support at his local church, but before that he scraped by for decades.”

While initiatives like Housing First prioritize the elderly, these ideas are fairly new and people who have experienced homelessness for many years may simply fall through the cracks. Seniors who experienced recessions, addictions or mental health crises decades ago, may still be trapped in a vicious cycle and uncertain of the opportunities available to them.

Ray and Alex’s stories are on an upswing, but the path they took to stability has been long and challenging. Without the assistance of a family support system or an organization like The City Mission, these men’s circumstances were headed toward rapid decline.

The consequences of letting the elderly poor and homeless fall through the cracks are heartbreaking. Sadly, older homeless who live on the streets or in their cars are much more likely to become a victim of violent crime because of weak health and mobility.

“We are dealing with the same issues with a 50-year-old that a housed person would have in their 70s, in terms of physical and mental health,” says Anne Miskey, a nationally recognized expert on homelessness3.

Homelessness exacerbates already poor health, as well as susceptibility to devastating health issues such as pneumonia, depression, dementia and more. Some suffering from these conditions might turn to institutions such as nursing homes, the emergency room, or psychiatric hospitals, straining a system that will only end up turning them back to the street after their temporary needs are met. This institutionalization circuit leads to the staggering fact that homeless seniors face a mortality rate that is four times higher than the general population4.

“There are so many intricacies when dealing with a 60+ individual and it truly takes the collaboration of multiple agencies that are dedicated to his or her stabilization, which requires resources and time. The unfortunate reality is that many shelters are not capable of dedicating the proper resources, staff or time in order to achieve proper stabilization for this population,” says Ashley Field, another caseworker at The City Mission.

While other vulnerable homeless populations such as women and children can be at the forefront of our minds, the older homeless are also in dire need of unique solutions that allow them to age with dignity.

Standing in the Gap

When speaking with Ballenger about his clients at The City Mission, he notes that there are definitely practical steps to take in restoring the lives of people in the older homeless population, but that the most important factor in their success is relationships.

Relationships with people in a local church or organization can make all the difference in an elderly person’s ability to evade homelessness. Critical care such as rides to the doctor, help navigating a computer and assistance with meals are all simple solutions to what could become a complex problem.

If you’re interested in learning more about this population and the most effective ways to serve them, Ballenger and Fields recommend getting in touch with a local crisis center, meal delivery service or church. These types of organizations often have volunteer or donation opportunities that are specifically geared toward assisting seniors. Even a small commitment could dramatically increase quality of life for an elder that’s facing isolation and poverty.

In Alex’s case The City Mission was his bridge from crisis to sustainability. Today, Alex is continuing the Crossroads program so that he can further his computer skills in the hopes of gaining part-time employment, income from his disability, and most importantly, a home for him and his son. When he’s regained his self-sustainability, he plans on coming back to help others who are experiencing the same challenges he’s overcoming.

“The City Mission’s a very special place. It’s beautiful.  It helps us spiritually, mentally, and physically. God sends those who have been here, back to help.  This is my neighborhood and I’ll definitely be back,” Alex says.

Will you consider making an investment of time and money to save the life of a vulnerable neighbor? Visit our how you can help page to learn how you can serve our older guests!