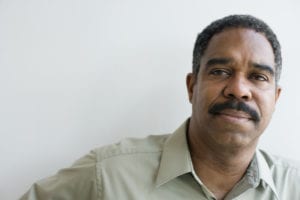 James* never expected to be homeless. Before he found himself on the streets, the 60-year-old family man dedicated decades of his life to a local company and spent his weekends volunteering with the very group he would eventually become a part of.

Unfortunately, the stable life he had built for himself didn’t prevent him from entering a part of the homeless population aged 50+ that experts call “older homeless.” According to the Department of Housing and Urban Development, this group makes up approximately 30% of the measurable homeless population1, and their chance for recovering quality of life — let alone survival — is minimal.

When James hit rock bottom he came to Crossroads Men’s Crisis Center, a ministry of The City Mission that empowers men, women, and children in crisis to overcome their unique, complex paths to homelessness. At one point in late January, 133 men were staying at Crossroads – 76 of whom were 50 or older, and 26 above the age of 60.

According to these stats, an average of over 55% of The City Mission’s male guests face a much more challenging path forward than younger clients. What is behind this large percentage of older homeless, and what can be done to help an aging population with immense barriers?

Causes of Homelessness for the Aging Population

1. Economic Instability
Sadly, James’s cause of crisis that led to homelessness is the same as many other blue-collar workers’ struggles in the 21st century – he lost his job. The company he’d spent 20 years with suddenly let him go in favor of hiring younger, less expensive workers. He looked for a new job but couldn’t find an employer willing to hire someone so close to retirement age. James was stuck.

Job loss, recessions, rising housing costs, foreclosures and more can all throw a relatively stable, hard-working person into an emergency. Studies show that it takes a person ages 50+ an average of five months longer to find a job than younger workers. And according to the latest ALICE report, 28% of our neighbors in Cuyahoga County are at major risk for disaster after missing just one paycheck2. Residents that qualify as ALICE have income above the Federal Poverty Level, but not high enough to afford a basic household budget that includes housing, childcare, food, transportation, and health care. One unexpected expense or loss can send this part of the population, especially seniors, spiraling toward homelessness.

2. Illness
James’s difficulty in obtaining a new job was exacerbated by another factor — his health. While he was able to complete his tasks at work, he was becoming slower due to nagging hip pain. Because his only work experience was in physical labor, he hadn’t gained the computer skills necessary to obtain even a low-skill job in today’s digital world. In the eyes of many businesses, James was unemployable.

Medical issues can destroy finances, leave work history gaps and even render individuals physically unable to work. A person like James might be forced to turn to S.S.I. — Supplemental Security Income — a social service that helps low-income elderly and the disabled.

“Many over 50 are living on a very modest disability income which makes it difficult to find affordable housing even though the rental cost may only comprise 30% of their income. Most disability checks are less than $800 per month. Even if the monthly rent is $240, that only leaves $560 for all other expenses which makes it very difficult to survive,” says Chuck Murawski, resource center supervisor at The City Mission.

3. Loss of Support System
The most difficult part of James’s crisis came when his wife left him. She took custody of his teenage son, and his young-adult daughter moved out on her own. James maintained his relationship with his children, but they were unable to support him, and he was unable to provide them with the care he knew they deserved.

At Laura’s Home Women’s Crisis Center, The City Mission’s ministry for women and children, many female clients over the age of 50 cite a late-in-life divorce or finally fleeing intimate partner violence as their reason for crisis. These circumstances can leave a senior woman with little means to care for herself. Other seniors face deep depression or addiction after the loss of a spouse or loved one. Some simply refuse to let family members know how much they are struggling and would rather hide their crisis than become a burden. Whatever the case, when an elderly person’s support system disappears, they can quickly find themselves on the street.

The Consequences
The consequences of letting the elderly poor and homeless fall through the cracks are heartbreaking. Sadly, older homeless who live on the streets or in their cars are much more likely to become a victim of violent crime because of weak health and mobility.

Homelessness exacerbates already poor health, as well as susceptibility to devastating health issues such as pneumonia, depression, dementia and more. Some suffering from these conditions might turn to institutions such as nursing homes, the emergency room, or psychiatric hospitals, straining a system that will only end up turning them back to the street after their temporary needs are met. This institutionalization circuit leads to the staggering fact that homeless seniors face a mortality rate that is four times higher than the general population3.

“It truly takes the collaboration of multiple agencies that are dedicated to his or her stabilization, which requires resources and time. The unfortunate reality is that many shelters are not capable of dedicating the proper resources, staff or time in order to achieve proper stabilization for this population,” says Ashley Field, community development coordinator at The City Mission.

Standing in the Gap
When speaking with Murawski about the clients he helps at The City Mission, he notes that there is practical help to offer the older homeless population.

“At The City Mission, we offer weekly on-site medical evaluations and transportation to doctor’s appointments, and job training assistance through partner agencies such as Towards Employment,” he explains. “We also offer individualized assistance with monitoring the approval process and helping them make the necessary phone calls and appointments to move along their SSI or SSD process.” Achieving stability can be a lengthy process for adults over 50, but with the support of a healthy community, it’s possible.

If you’re interested in serving people in this demographic, the staff at The City Mission recommends getting in touch with a local crisis center, meal delivery service, or church. These types of organizations often have volunteer or donation opportunities that are specifically geared toward assisting seniors. Even a small commitment could dramatically increase quality of life for an elder that’s facing isolation and poverty.

In James’s case The City Mission was his bridge from crisis to sustainability. James completed the Crossroads program and strengthened his computer literacy in the hopes of gaining part-time employment, obtained income from his disability, and most importantly, a home for him and his son. When he’s regained his self-sustainability, he plans on coming back to help others who are experiencing the same challenges he’s overcoming.

“The City Mission’s a very special place. It’s beautiful. It helps us spiritually, mentally, and physically. God sends those who have been here back to help. This is my neighborhood, and I’ll definitely be back,” James says.

Will you consider making an investment of time and money to save the life of a vulnerable neighbor? Visit www.thecitymission.org to start serving at a local Cleveland crisis center.